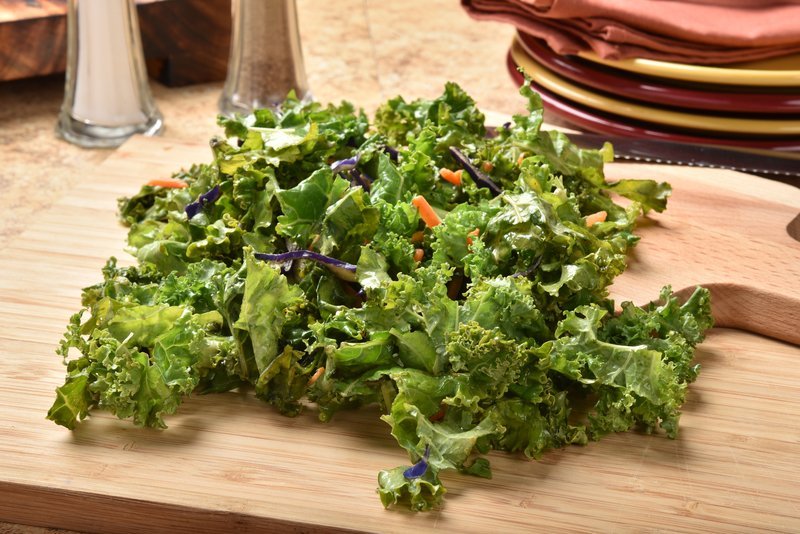 This post is from a few year’s back, but it’s worth recycling! Especially in this season of spring when our liver energy is high and green foods such as kale are good support.

Consider this recipe a special gift from me to you!  I first tried this salad while visiting a friend in Vancouver. Her 4-year-old was gobbling it down faster than you could say “but it’s healthy.” (This was before kale was cool.) Understandably, I was hesitant; I associated raw kale with thick rubbery bitterness. After my first bite, I was pleasantly surprised.

Once I got home, I made it for Claire, my 13-year-old, and she and I fought over the bowl.

I have made the Killer Kale Slaw countless times over the past year and it seems to please even the most skeptical palate. Last night Claire didn’t want to have any because she didn’t want to get started. She claims there is something in that salad that forces you to keep eating and eating it. Well, she did have a bit and before we knew it she was into her fourth helping with an eye roll and an “I told ya so.”

Kale salad has really come out of the closet lately: a kale revolution has erupted!

Kale is considered one of the healthiest things you can eat, and for a variety of reasons. It is a member of the Brassica family of superfoods (broccoli, cauliflower, Brussels sprouts, cabbage, etc.).  Kale is very high in antioxidants (carotenoids and flavonoids), has anti-inflammatory properties (thanks to omega-3s and vitamin K), and is high in cancer-preventing glucosinolates. Kale also supports cardiovascular health (lowers cholesterol), and supports the body’s detoxification process.  Check out the kale-based research and recipes over at http://www.365daysofkale.com.  Another site with tons of good kale info is http://www.whfoods.com.

There is some question as to whether you can still receive the same nutritional benefits eating kale raw as you do when it’s cooked. The argument is that nutrients may be bound up and need heat to release them. I searched high and low and could not find anything conclusive. I say, go for it!

This winter I went to a farmer’s market and they only had red kale. The vendor told me it would give me the same result and was fine to eat raw.

As I made the salad, though, something didn’t seem right to me.

I am pretty intuitive on a good day and my body was saying “don’t make a huge bowl like you normally do; you and this slaw ain’t gonna agree.” So I only had a small serving while the rest of the animals at my table (except one, and you will hear more about him later) tore into it. As I was eating, it tasted the same as green kale, but things weren’t jivin’ for me. No one else seemed to notice a difference.

A couple of hours later I felt like I was getting a sore throat. Then it felt like my throat was swelling, and then burning! Claire offered to drive me to the hospital. She’s 13, but her grampa makes her drive him around in his minivan on bush trails (another story entirely). She told me if my throat swelled shut to the point that I couldn’t ask for help or tell her what I needed, that I should just start heading for the door and she would know that was code for her to get me the heck to the hospital! I liked her safety net, even though my husband (a.k.a. Mountain Man) was sitting in the same room, completely oblivious to the entire situation.

It was the oxalates (at least that was my intuitive guess)!

They were irritating my throat like shards of broken glass. It didn’t get much worse, but my throat was raw and irritated for a few days. Oxalic acid is found in many foods (spinach, swiss chard, kale, beets, bell peppers, tomatoes, and sesame seeds, to name a few). If you notice a burning sensation when you eat any of these foods, I take it to mean the oxalic acid content of that particular food is too high for you at that particular time. After extensive online research, all I could find out was that some people can be more sensitive to oxalates at certain times than others. It does not mean that you will always have the same experience. I am assuming that my experience with red kale was my own isolated sensitivity party–what fun! Come to think of it, arugula can sometimes give me the same feeling. . . . But throat burning-swelling-near-death aside, this slaw is killer!

Toss kale, pepper, and carrots in a large bowl.  Puree oil, vinegar, ¼ cup peanuts, brown sugar, and salt in a blender until smooth.  Pour dressing over vegetables 30 min or so before serving. It’s best if you massage the dressing into the kale (this breaks down some of the toughness and infuses the salad with some Qi). Sprinkle with remaining ¼ cup peanuts, coarsely chopped.

This salad is good even a couple of days later, so don’t throw out your leftovers! But we rarely have leftovers due to the addiction factor.

You may also like Signs and symptoms of spring and Bittersweet spring: natural solutions to seasonal allergies

This site uses Akismet to reduce spam. Learn how your comment data is processed.

Enjoy Five Minutes of Qigong With Me Now and Experience Peace and Harmony!

You have Successfully Subscribed!